This is a record of 11 of 53 songs written and recorded by Andy Higgins in 2018 – will the other 42 ever see the light of day – – possibly not. So far it has received one review which summarises it below. Comes with poster and lyric sheet to help solve the puzzle on the album cover and rear.

Andy Higgins is a doofer, he has his hands in many pies and is a ruddy amiable chap – I like that! He is primarily part of that advancing 3-piece known as Litterbug, a very underestimated band that are on something of a rise and starting to turn a few good heads this way and that – I like that too. 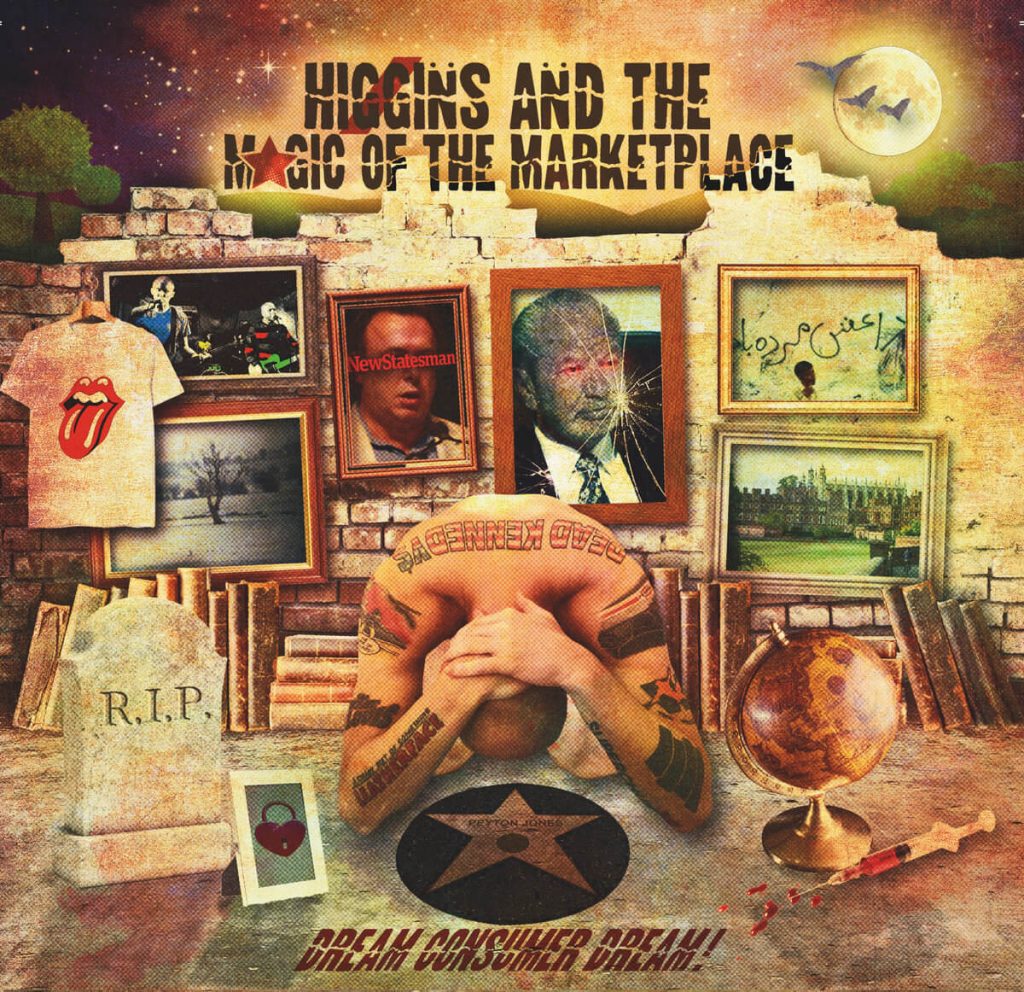 Here the man is dabbling again, I think for some there is no hope – what a wonderful situation that is! The band under the spotlight I know sweet FA about, I go in as cold as Pope John Paul’s left testicle and as eager as a fat kid in a pie shop. I will give what everyone expects – 100% effort, 100% honesty, 100% belief – if that ain’t enough then so be it – I am a mere dog chomping and trying, not one lying in a basket waiting for the master to create an easy life!

‘Emily Goes To Public School’ twinkles in, picks up on the general drive and pushes on with a strained vocal style that compliments the tight and orderly musical arrangement that gives very little away and always appears taut and played with a good thermal focus. The skins react to the rhythm with a spark of naturalness, the 2 sided wire work copulates with inseparable unity and as a result we get a solid opening track that simmers with frustration at those with silver spoons acting like goons and destroying the realms of the half-decent. I play the track several times over, get more drawn into the architecture of the song and further appreciate the general construction – tidy workmanship I reckons. ‘Again And Again’ takes to the throne of noise making, vocally struggles like a constipated crapper of cacophony before a release valve is moved, a repeat of the song title had and laxative induced lilts come. The song is simply curled down, is laden with nutritious weight, stinks better when oral poison is spat. This snippet is short, placed in this second position does it no harm – it gets one replaying, discovering and enjoying the impetus of the CD thus far. ‘Insane World’ is a perfect follow up, gently alters tack, gives an emotive enhancement and works with a severe sweat on the brow. All areas are pushed, pressurised and yet given room to breathe. With such intensity the players do well to keep all areas clear, functioning as one and contributing to a very convincing piece of zoned in music of delicacy and latent power. I think this one completes a firm and variety riddled opening hat-trick – I play over and over just for good measure!

‘The Weather Changed (An Ode To Litterbug)’ begins with some inane Monk-ish choir spouting an oral illness that throws me off at a dangerous angle (Stanley Unwin – can you help in any way). The song proper eventually kicks in, has a biting verse, a mild chorus, all the while scaffolded by some hot-roasted guitar work and up-tempo stick work. The impetus here is the winning factor, the song is well-blown and kept on its toes by musicians looking to uphold a set standard – it just scrapes by. ‘Remember Me’, is an emboldened number with some marvellous accents and a double headed he/she delivery that really encapsulates the insights and creative juices the players are using. The opening synthed spices set the jowls salivating, the dish proffered does not disappoint. What a complete and invigorating number this is, and taking us into the sharp and snatching ‘Celebrity Is Dead’ with the standard still very high. This one stutterguns, nails a few facts for you to mull over and slowly rises to a gratifying boil with a handclap of delight that the A-list shits and the like, are indeed dead (if only). Too many at the top and bottom of the heap make Gods and this creates this situation called ‘celebrity’ – it is a realm built on ego, weakness and need – and baffles my fuckin’ bonse. This is the most venomous song thus far, really pierces the epidermal layer and injects home its pertinent point – lovely!

We head down the highly anticipated homestretch with the guiding hand of ‘We Are Not The Rolling Stones’, this is a restrained song and the main gratification I get from the rhythmic gift is when the band let themselves go via a bittersweet chorus that reminds you of the stance, the position, the way in which this music is created. I do struggle to get fully upbeat about this one although it is a quite steady track. I feel just a few extra embellishments are needed and a bit more juice in the mixing desk. As per – tis a personal viewpoint but for me, there are better offerings on this fine CD. ‘Visiting The City’ grinds matters out and after the opening hollers and exposure of inner pride this creation travels on well-perked heels and with chest swollen, duly gets on with matters. The swish of the sonic sabre cuts the attentive flesh, forces a bleeding response of sanguine acceptance and as we nod along it is safe to say the band are in a sound comfort zone here, not taking any risks and doing things of a solid and reliable standard. Not the best song on the CD, not the worst, one of those moments where one just thinks ‘yeah, safe man, safe’ – tis no bad thing!

‘Lord Sugar Will See You Now’ begins with a soundbite, jumps in and then indulges in a Rainbow-esque eruption that perhaps is a moment of inspiration or a sign of aging heads getting generic values confused. It is a nice moment and kick-starts a more than adequate song that makes one consider why we should wait ‘on the man’ and not get up and just keep on doing it ourselves. The movement here is once again, well-muscled and fluent, the switch to the mid-muso break is liquid, the blend of all components highly meritorious, the more I rotate this one, the more effect it has – the A OK sign is sincere! ‘Movie Star’ rolls in, pulses, softens the impending blow with some soothing ghostly whoo’s before the chug comes, a first verse and a sub-chorus take the reins and we are left in the midst of a very reliable song. The undulation of the emotive touch is spot on, the effort in the chorus equally so and this for me is a strong penultimate piece that gets better and better with every play – a subtle grower for sure. We close this intriguing collection with ‘Sunshine Every Day’, a marvellous uplifting spurt of defiance that travels hard, travels true and finishes the CD on a very assured and measured note laden with good music-making talent. The 4 count, the focused and pushing verse, the blatant refusal to buckle and the thermal sanguinity that blesses the bonses of the confident all win my favour. This is a sinewy showing, a solid punctuation mark on a CD that has met the expectations and given some nice surprises.

That is that, Mr Higgins is a gent, a talented man and a thinker – it ain’t no bad way to be and here these qualities pay fine dividends. For me, this CD needs seeking out by all and sundry as it breaks away from the regular punk strain, brings an earnest quality to the stage and all I need do now is book these buggers for a ‘live’ show – Mr Higgins – nudge bloody nudge sir and well done to all involved.