Rebellion 2015 – Blackpool Rox Fanzine – Streetlife Charity Over 200 bands are playing at the annual Rebellion Punk Festival in Blackpool this weekend. It’s the biggest punk festival in the world and brings a lot of good things to the town. The full line up www.rebellionfestivals.com/line-up/stages and the energy it creates means lots of other gigs are taking place every night and day in pubs and clubs, all around the town centre. This year Rebellion is supporting the local Blackpool charity Streetlife – the charity is being badly affected by the austerity cuts so it is a worthwhile cause

Upcoming releases include Stay Clean Jolene’s S/T album (JSNTGM 028) – will be released on CD in conjunction with Bombed Our Records from Leeds, and the vinyl will be released courtesy of Drunken Sailor (UK) and Dead Broke (US). The delay is purely down to the backlog at the pressing plant but I can assure you that it will be worth the wait as it is a great record. Really looking forward to getting it out. SCJ are playing this Friday 26th September at Manchester’s Ruby Lounge with Snuff and Mr Shiraz- should be a cracker. After their first appearance 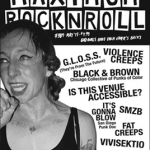 Things have been extremely busy at Rox Towers lately – it’s all reviews, releases, gigs, a new issue of Blackpool Rox and our General Election campaign in Blackpool South – read on. Our two latest releases are both doing really well. All the reviews for The Stay Clean Jolene’s album have been terrific – even Razorcake liked it FFS ! The boys are busy writing material for their follow up album and will be playing the Scene Better Days Fest in Leeds on July 11th the Summer Monster Mash Fest Stamford Lincolnshire June 20th. Soon after their sojourn to some

The latest interview in the ‘Never Mind the Politics, Here’s the Music’ with Jello Biafra (Dead Kennedys – Lard – Guantanamo School of Medicine) is available on  – two x 10 minute videos covering everything from the politics of the counterculture and the emergence of punk ……. to its corporatisation during the 90’s and beyond. All Jello’s answers were unrehearsed first takes straight off the bat – pretty amazing really. The debut 7” single by Stay Clean Jolene (jsntgm 026) is available …. 3 track e.p. is released in conjunction with our friends at Drunken Sailor (UK), Eager Beaver (Japan)

Keeping you all posted in what is going on in the world of justsaynotogovernmentmusic records. We are filming a series of interviews for our documentary project ‘Never Mind the Politics – Here’s The Music’. First up is Tim Smith (The Adverts, Cheap, TV Smith and the Valentines) – and we are currently editing interviews with Jello Biafra, Dick Lucas, Steve Drewett, John Robb and they should be on line soon. With people asking ‘where are the modern protest songs ?’ and ‘what has happened to political music?’ is politics disappearing from popular music culture ? Check out the links below

This the first in a series of interviews with influential musicians filmed by Andy Higgins and Steve Pennington. First up is TV Smith – (The Adverts, Cheap, TV Smith and the Valentines) filmed at Rebellion Festival Blackpool …. soon to be followed by interviews with Jello Biafra (Dead Kennedys, Lard, Guantanamo School of Medicine), Dick Lucas (Subhumans, Culture Shock, Citizen Smith), Steve Drewett (Newtown Neurotics), John Robb (Membranes, Goldblade) and lots more.The Project – With questions such as, ‘where are the modern protest songs ?’ and ‘what has happened to political music?’ becoming increasingly common, there is a growing realisation 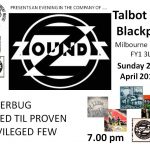 We are pleased to announce that Zounds are re-visiting the little homestead of Blackpool on Sunday April 29th 2012.Zounds last reformed played Blackpool in August 1996 at the inaugural Holidays in the Sun festival. Releasing records from the late 1970’s on the Crass label, Rough Trade and more recently on Over-ground Records Zounds are one of the most interesting and original bands to have emerged from the UK anarchist punk scene. Zounds are playing at the Talbot Club on Sunday 29th April with support from Litterbug (Blackpool), Hated Til Proven (Manchester) and Privileged Word (Blackpool).

The Magnificent are a punk rock trio from West Yorkshire, England. We sing about stuff that affect our lives. Important things like coal mining, Royal Weddings, the decline of modern civilisation, cutting down trees, playing squash and being in love. Our new album ‘Bad Lucky’ is our second full LP. There is a lot of global unrest at the moment, and people of our generation don’t know what to do with their lives. The album is about how a generation struggles to emulate the feats of their parents, ‘the baby boomers’. Everyone is poor these days and everyone struggles to

You Tube Video from Higgins++https://www.youtube.com/watch?v=gLen7hbT1P4&feature=emb_title

The first update for a while friends – apologies for our academically enforced absence – however we are back with sharpened intellectual knives and critcal faculties to rejoin the war on government music – if you want to be removed from the list please hit the unsubscribe button at the bottom of the page. The jsntgm.com website has been revamped with a new Blackpool Rox III database which we have been busy updating with reviews stretching back over 30 years with loads more to be added. We also have a John Robb interview and if you are interested in becoming

This is the new look justsaynotogovernmentmusic site and the lauch of Blackpool Rox III. This is the third incarnation of our local zine and will in time be populated with all the written words from Blackpool Rox I and Blackpool Rox II. The Summedaze section has the history of Blackpool’s longest running local DIY festival and details of how to get involved for next year. The video section features footage fo the Great St Louis – we have some new ones in the pipeline too. We also have Great St Louis and JSNTGM merch available in the store. 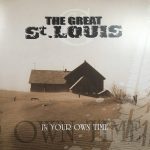 Great St Louis – New Album – In Your Own Time

The second album from Bolton’s finest sons is an absolute belter. Released in conjunction with Boss Tuneage records the follow up to their amazing amazing Forever Now has songs which range from freight-trains to mid paced eulogies, yet all are drenched in the beauty of the heartfelt every-day. Their last album has recently been described as ‘one of the releases of the last decade – but also probably one of the best kept secrets too outside of the punk community’ so when the band start gigging again in spring you better check them out. Look on their new MySpace http://www.myspace.com/gslthegreatstlouis

Summer Daze 6 – What are we gonna do when the money runs out ?

Blackpool council have confirmed that they will not have sufficient funds to contribute towards the running of this year’s free Stanley Park Summer Daze festival. In the previous two years a big chunk of the costs of the PA and staff has been covered by Blackpool Council (for which we have been very grateful) however this year a council spokesperson has confirmed that there is ‘a very tight constraint as [the council] has a number of strategic to support out of the core budget’ this means ‘our small grants programme has been seriously reduced and is to be frank miniscule’ 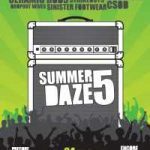 Apologies that things have been quiet at JSNTGM HQ lately. Blackpool Rox II fanzine is having a temporary break and our regular e-mail communiques are currently hibernated. The main reason for this is that I am in the middle of writing a book – which has been taking every waking hour for over 12 months … hopefully this will be completed in mid 2009 so things will then be back on track. However in between voluminous doses of politics and teaching we have managed to keep certain projects giong forward. In August 2008 upto 500 people came along to the

A bunch of local musicians and promoters are scheduling a 2 day BLASTED festival taking place on Friday and Saturday 16th/17th of March 2007 at the No.1 Club on Bloomfield Road. All the bands playing at BLASTED will be recorded through the desk and then mixed down to provide what should hopefully be a ‘good live recording’ which they are then free to use as they see fit. Any bands keen to play (particularly the younger bands) need to contact Andy Higgins on andy@jsntgm.com or send through a demo to ROX TOWERS – PO BOX 1025 – BLACKPOOL – FY3

Read More »
Scroll to Top
We use cookies to ensure that we give you the best experience on our website. If you continue to use this site we will assume that you are happy with it.OkPrivacy policy