Malcolm Owen born under the Sagittarian sun on 12 December 1953 sadly only enjoyed 26 full revolutions of our nearest star leaving this earthly realm during his 27th year on 14 July 1980.

In 2010 John Robb penned an excellent article on Quietus  https://thequietus.com/articles/04432-the-ruts-malcolm-owen-30-year-anniversary covering Owen’s tragic exit and explaining why he thought Malcolm Owen was one of punk-rock’s great forgotten figures.

I first heard The Ruts and Owen’s more guttural than dulcet tones on the John Peel show soon after the release of their debut single ‘In A Rut’ in January 1979. The song was slower, more brooding and more intense than the rest of great punk explosion of the time. I couldn’t quite put my finger on what it was but there was always something unsettling and different about it.

That summer saw the band’s follow up singles Babylon’s Burning and Something That I Said reach 7 and 29 in the UK charts. More importantly these respectable ratings dictated that Thursday evening’s Top of The Pops was obliged to allow the watching British youth to witness the magical sound as flesh. We were not disappointed The Ruts (and particularly the charismatic Owen) looked as good as they sounded and like certain other bands of the time (UK Subs, Angelic Upstarts) it felt to me like they meant it.

Robb states that The Ruts have had a long lasting, if unrecognised, influence that has stretched through the decades and this rings true as I jog around Stanley Park listening to the hooks and melodies which made their debut album such a standout record. The musicianship was never in doubt and I appreciate it even more today than I did as an angsty 14 year old. The superb rhythm section of Segs and Ruffy underneath Paul Fox’s effortless guitar work combines to ensure every verse and chorus is distinct.

My weekly run comes to an end, I prop up my increasingly out of shape frame exhaling profusely wondering why I subject myself to such torture. That said as I regain my breath I reason that it’s not torture at all, in fact it’s probably what I’ve heard referred to as ‘a good hurt’.  The final track ‘Human Punk’ plays itself out on my headphones …. maybe that ‘something different about it’ that I never understood is the raw emotion in Malcolm Owen’s vocals, listening to them nostalgically now over 40 years on also feels not only like a ‘good’ but also a ‘meaningful and energising hurt’.

In 2015 the book ‘Love in Vain the story of the Ruts & Ruts DC’ has a foreword by Henry Rollins in which he concludes  ‘We have the music. That means the music is all well. Act on that. Keep this music going into the future. Turning someone else onto these great songs might be the best thing you do in a day – so do it often’.

Over the past week I’ve been putting together the Rebellion 2020 CD of new bands which would have been playing the Introducing Stage in Blackpool this August. I asked all the 51 featured bands to name three key influences, sadly none mentioned The Ruts. 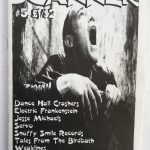